Proposals of the THPA

We consider it important to remind that, according to the long-standing practice, in the case of minority language schools, these restrictions were separately regulated in order to provide the same number of hours for the invariant component and to enable the variant component to be implemented in all types of schools, regardless of the language of instruction. (For example: Appendix No. 1 and Appendix No. 4 of the Order of the Ministry of Education and Science of Ukraine No. 132 issued on February 23, 2004. In the note to Appendix 4 it is stated that in the case of secondary schools with instruction in languages ​​of national minorities, on the expense of the total student load, the maximum permissible load is increased to the extent that does not exceed health and safety standards, for example, for 5th grade students the maximum permissible load in the case of schools with the Ukrainian language of instruction is 24 hours, and 27 hours in the case of schools with the language of instrucion of national minorities.)

Without addressing this issue, the right of national minorities to equal access to education will not be exercised, since they will not be able to study the national, native and foreign languages ​​on a level equal to the students of the secondary schools with the Ukrainian language of instruction - this is discriminatory treatment of children.

At the joint meeting of joint meeting of the school principals (with Hungarian language of instruction), the heads of the parents’ committees, the heads of the units of the Transcarpathian Hungarian Pedagogical Association on February 19, 2020, the issues of the proposed new curricula of the Ministry of Education and Science of Ukraine were discussed and recommendations on the introduction of curricula in schools and classes with Hungarian language of instruction were adopted:

• We strongly reject the principle of assigning a native language to category of foreign languages (paragraph 23 of the State Standard).

• We require that compulsory foreign language instruction is provided in primary and secondary education in the same way as in Ukrainian language classes.

• To this end, it is necessary to increase the hours of the language group, for minority language classes at the expense of the variable part of the national standard, to study Ukrainian, native and foreign languages ​​in a volume that will enable them to master all three languages ​​properly. The proposed changes to the number of hours are supported by teachers, principals of schools/classes with the Hungarian language of instruction, as well as the parental community.

• Taking into account the right of all citizens to equal access to education, the Transcarpathian Hungarian Pedagogical Association asks the Ministry of Education and Science of Ukraine to make adjustments to the relevant standards and to develop standard curricula that will ensure the exercise of this right.

• We believe that the quality assurance of Ukrainian language learning should be pursued not by increasing the hours for studying, or by switching to other subjects in Ukrainian, but by developing appropriate standards and programs, methodologies, textbooks, didactic materials, dictionaries, considering the language specificity of this minority.

• In order to preserve national identity, it is necessary to introduce into the invariant component the teaching Hungarian folklore at the expense of compulsory lessons, in 1 hour per week in 5th grade, local studies (in the curriculum of this subject children would study in which countries the Hungarians live, what is their ethnic specificity) in grade 6, Hungarian history in grades 7-8-9, also 1 hour a week.

• The Transcarpathian Hungarian Pedagogical Association has developed and published educational programs and textbooks entitled History of the Hungarian People, History of Hungarian Music. We ask for your permission to include them in the approved curricula, which have been approved for use in the educational process with the possibility of their inclusion in the curriculum of the institution.

• When compiling a curriculum for subjects that affect identity development, such as culture, arts and fine arts, singing and music, works and artists, the hallmarks of Hungarian culture should be part of the curriculum and set of requirements.

• In order to ensure a high quality education of Hungarian language and literature, the following should be considered:

• It is necessary to create the possibility of conducting an independent external assessment in the native language and drawing up a state final certification for the Hungarian language in Transcarpathia. The requirements and content of the Hungarian final exam should be adapted to the requirements in force in Hungary.

• Independent external evaluation from other EU foreign languages, such as Bulgarian, Greek, Polish, Romanian, Slovak, Czech, as well as Hungarian as a foreign language, should be created.

• It is necessary to abolish the provision of the Law on the State Language, which, unlike the practice of the previous decades, stipulates that passing the final and therefore entrance examinations in all subjects is required not in the language of education but in the Ukrainian language, which is a narrowing of the rights of national minorities, of the law and is discrimination, as this will not assess the level of proficiency in the subject, but the level of command of the Ukrainian language. Positive experiences from European countries should be used where national minorities are allowed to take their final exams in their native language.

• The Ministry of Education and Science should apply different requirements, for example, to the minimum number of students in classes, as in the case of schools with Ukrainian language of instruction. Positive European experience should be taken into account and a positive coefficient should be applied to preserve the network of minority education institutions.

Based on the proposals stated above, the joint meeting of the school principals (with Hungarian language of instruction), the heads of the parents’ committees, the heads of the units of the Transcarpathian Hungarian Pedagogical Association requests the introduction of the following curriculum standards for grades 1-4 and 5-9. 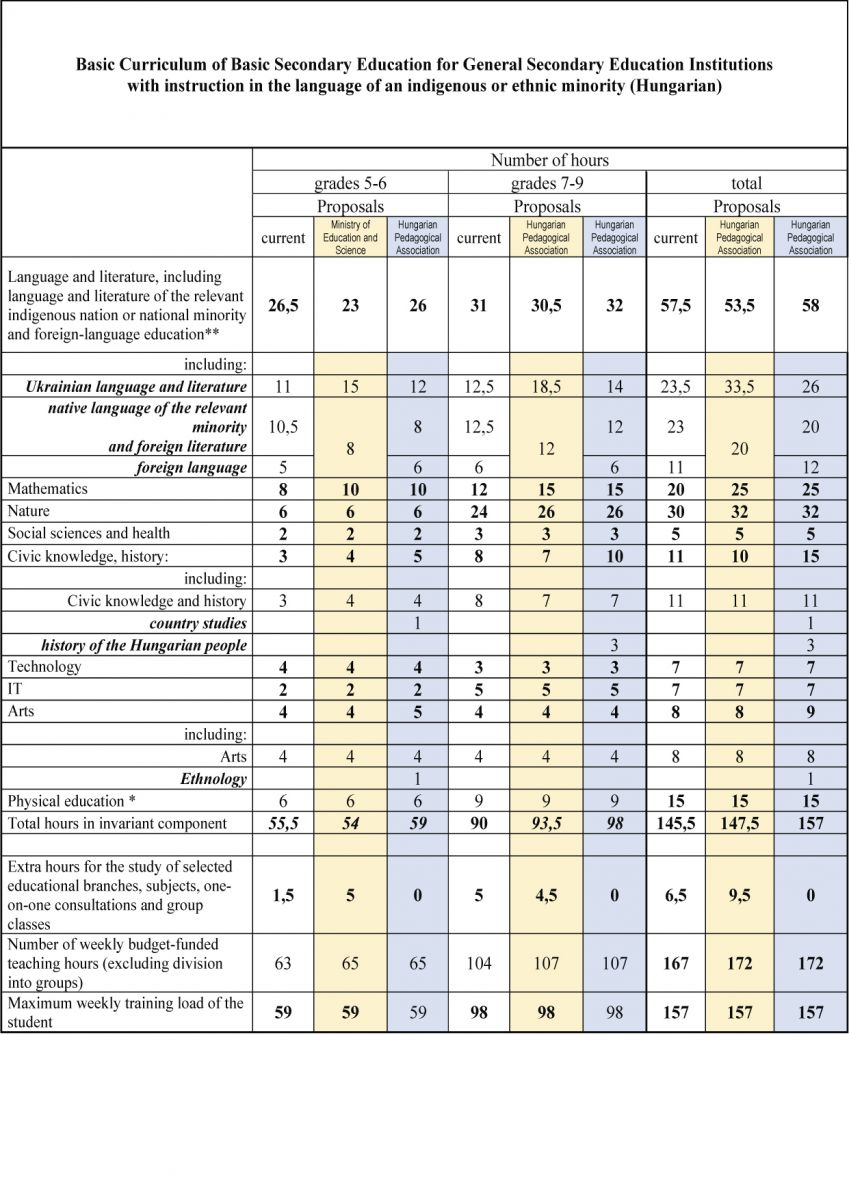